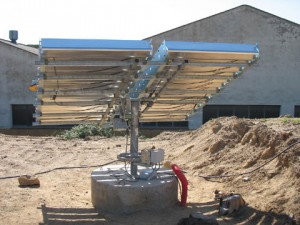 Can be fasten on the ground or on a roof by screws.

You can fix any kind of pannel, even fotovoltaic or thermical, and you only need a spanner to do it.

Every X minutes (between 1 and 90, according to what has been programmed), it calculates the position and moves the tracker if necessary. When the Sun sets meaning that the inclination of the sun over the horizon is negative, the tracker  will turn to the East and place itself near the horizon (approximately 80 degrees with regard to the vertical).

When the Sun rises, the Solar Tracker FEiNA SF09 returns to its almost vertical position. From this moment on, it carries out the normal daily movement.

All the trackers from a plant can be connected from a central control.

It can be fasten on the ground or on a roof by screws.

You can fix any kind of pannel, even fotovoltaic or thermical, any you only need a spanner to do it.

It is a two axes solar tracker.
It allows other Solar Power
applications that need
better aiming.

It can resist 140 km/h
wind velocity.

It’s controled by a microprocessor whith an internal clock that calculates Solar Tracker possition deppending on time, day and latitude.

The electronical parts and the engines consum, is extremely low, near 3 w.h each day (lower than 0,1% of the energy generated by the solar pannels).

You can obtain an increment of energy production as fot fixed pannels:

It’s realy reliable, safe and economic, because of it’s simplicity.

It has an 4 rows LCD pannel that indicates:
Date and time
Diagnosis Program 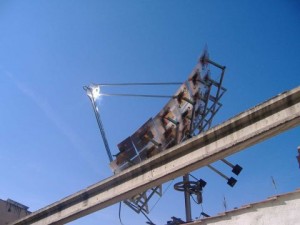 The ground surface needed for a Solar Plant is the same even the solar tracker are large or small. For exaple, a 500 kwp plant with
2 axis solar trackers and 15% performance on 40º latitude, needs 24000 m2, even you use large  Trackers or small ones.